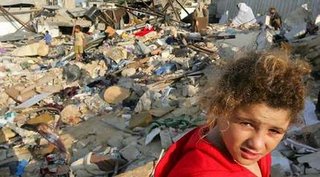 I have been following a few blogs during last week, and I'm surprised to the amount if Israeli comments on any post about what is going on in Lebanon.

Some posts have more Israeli or pro- Israeli comments than Arab comments. You have to give it to them, they are masters in public relations, propaganda, and media. We suck at it.

They occupy our land, they come out being people returning to their home land in peace. They kill women and children and starve them, deprive them of basics of a decent life and much more, and they are these poor people defending themselves against the brutal Palestinian children, and their rocks of misdirection. They bombard villages and kill convoys of civilian safety seekers, and they are helping the region regain stability from the Bad Bad hisbulla.

On the other hand, we loose our land "since for ever" get kicked into asylum, and we end up the bad guys who don't want to live in peace with our sweet neighbor. We try to defend what is left of our torn land destroyed homes and raped women and we are terrorists who kill civilians.

The truth is on our side, but we are so stubborn and mislead, to think that only the truth will get us the international support we need for our cause. We need to do a better job at showcasing the truth and the brutality of the Israelis.

Even thought the blogs are ours they feel obliged to comment, and correct our wrong views ( according to them ) even thought our news agencies are against them, they accept to guest on them, even though they know in advance that they will be cut of, but even a couple of sentences is worth for them. but for us ...well no so much!

Until we get out of our cocoon, and start facing the reality that we need to work harder on improving our image, and promoting our causes, the way we will design a promotion for any product or service we will be beaten. twice !

Tamara,
I have to agree with you in every word you have said .. Israelis and Jews in general are good marketers .. they are aware of the power of the "word" and the know how to deploy it .. and to drag attention to their what is so called cause or struggle against the barbaric Arabs and Palestinians .. if we want to be heard .. then we should start acting smart .. and we should know how to market our causes and struggles ..

But do you think this will ever happen .. ?

this is what I was talking about, we do not take initiative in any thing, but they do ! did any one of us consider visiting their blogs and say our mind ? I don't think so but they did...as individuals.

If we all take our responsibilities seriously we all have a role to play. to advocate our causes among each other and in the international society.

If I may add, We really don't need to improve our image it will be taken wrong anyway
We should focus on better our selves. Economically, and industrially. Then and only then would people care if we exist or not. When all our money is being spent on prostitutes and casinos, as the rich of the Arab world in the gulf focus on indulging themselves.
As long as our best and brightest are being driven out.
China has the worst image in the world, but no one dares to mess with them. including the world bully

I see what you mean, but we cannot wait till we are the strongest so we don't care what every one else thinks, this is a luxury "our dying children" cannot afford at this time.

We should be working on both sides at the same time since they don't contradict each other.

How I see it .. image has the biggest effect these days , in a world where media is in charge of everything ... for anything to work out .. You simply have to market it, it does not even have to exist, you only have to manage/manipulate in order to convince the mind of you observer with what you have .. the biggest evidence is what we see now of contradiction. We know what's Israel all about, and there are others around this world whom also are aware of that.. yet there are many many others whom have never heard of the Palestinian case/conflict and only know about Israel .. but the biggest problem is that the Zionist lobby if monopolizing the media in the sates and in many other countries .. where maybe the space for a creditable media channel wont be saved .. so .. media is the answer , yet it’s the cause .. feels like an emptied circle ..

However, I have to say that I agree with Tamara , waiting to straighten up our matters first will probably take forever , that’s why .. its better to get started at some point .

As for China .. well , I think there might be another reason why is states would never target China , and that is .. the number of its population , a country that shares over one fifth of world population cannot be demolished easily ..

You know all points are good, and worth pointing. We probably need to do everything. all at the same time, and work extra hard to catch up because we're really behind
It's hard to win in the marketing game, so maybe we can win in the industrial/economic war...

I agree with both of you, the bottom line I think is what Q said (work extra hard to catch up because we're really behind ) I agree, for the last few days I'm thinking of putting together a post about the things we can all do to make a difference. but I cannot seem to get around to it : (

Al7amd Lilah that you are well, and thank you so much for letting me know...