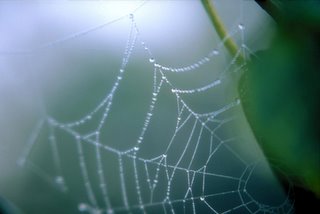 The little butterfly is a caught in the spider's web ...Shaking her fragile wings that have so many times taken her away from danger….

She is still caught in the web...No matter how hard she tries to get out of the web, she is still not able to shake it of ….so tangled in the web that even freeing one of her wings in longer enough.

She needs a burst of energy...a burst of rebellion …a strong effort to get out of the web …to get back to the fields … the flowers …all her friends ...To be again under he warm sun and drink from the pure dew in the morning. She has a lot to aspire for and live for but the spider is getter nearer by the minute.

She has consumed all her energy fighting through the night, and now with the promise of a new warm day breaking through, she is loosing hope in ever being free….

Will she gather all the energy of her being to break through …and fly freely among the fields?

No, the spider is coming and he will paralyze-sting her with his venom!
She's doomed, she was too dumb to fall for the pretty web...
She'll have all that is left in her short life to think about it as she get spun into a cocoon!

I know your not a fan of me giving you compliments …but I'm totally impressed, if you really understood what you have commented, you’re a genius, I would have not expected any one to get what I wrote, not in the way you did at least, I was expecting people to get out of it what I meant them to get out of it. (My vanity speaking)

I'm blabbering without making much sense I know ..I just wanted to say I'm impressed I guess there is a first for every thing, and you are right!! sad but true.

okay .. I think I may have also got the idea , reading behind the lines ..

Tamara .. if this is true , then why is the butterfly feels that desperate and down ?

I will never again underestimate any one ...promise : D

Alas… not all the pretty webs are the same...some we need to avoid at all cost! And the one the butterfly is caught in is the worst kind there is.
This is why I used the title (tangled) not sweet surrender or something similar...if you know what I mean

Okay .. now, I thought it was the "sweet surrender " type .. thats why i was kind of surprised for the sad tone in the "tangeled" thought ...

Asalam 3alaykom,
tamara..this post waga3ny..specially when qwaider solved the clifhanger part..and sharply stated the naked truth..
I think she has no energy to untangel because may be she really doesn't want to...maybe she's waiting for some miracle..
nice blog dear..thank u

First welcome to my corner I'm glad you liked it.

As for the butterfly I think at this point she wants to break free, but its too late or at least more difficult than to steer clear away from the shiny web when she first realized that its a spiders web.

What happened to the butterfly .. still tangled and fighting for freedom ? or closer to escape ?

been awhile since you posted something :) ..

I whish I can post new things, I have a few ideas but am extremely busy ...we have an audit going on so I don't have enough free time or enough free brain cells ; p

as soon as I get home I hit the bed and sleep till the next looooooong working day .

Soon I hope we will be done,