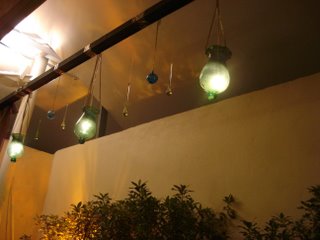 I have a million things that I want to blog about, but this last week has been just crazy! But I will not write abut that now, next week I will have more time on my hands…I hope ! for now I need your help with something, in my work I have a lot of people coming to Jordan from all over the world, for meetings and trainings and so on, so I have to take them out to restaurants. This part is fairly easy you call the place make reservations for 10 people or what ever the number is, but the problem is with choosing the places.

There are just not enough places in Amman that don't serve alcohol!! If I'm taking them out I don't want any one drinking and I don't care what they do on their own time. So will you please help me start a registry of the places that are alcohol free.

The places I know are :


Now I'm not thinking about the kids places, I mean a place I can take senior staff, that serves good food and a good atmosphere. This is really sad a Muslim country that has only five (to my knowledge) restaurants don't serve alcohol. Well there is apple bees as well but its not a place to take senior staff. I know I cannot do any thing about this so please help me assemble a list of the places I can use.

Fakher Elddeen
Tanoureen
Sultan Ibrahim for sea food
Bourg El Hamam at the Intercon
try the specialty resturants at the four seasons, the intercon and the other hotels.
Or for a casual dining..which i do not think you would like to take your guests to could be Al Kal7a, or a falafel sandwich for Kanary!!

I think you got me wrong, these places are all great and I have tried them, I want the same standard but with NO ALCOHOLE, do you have any in mind ? please I need the help : )

i think it will be hard to find places that do not serve alcohol in Amman, you know how it is, usually they consider these places "up there" or 5 star places if they serve alcohol..but to each his own...
i would stick to al kal7ah and kanary!! how about that?? or even a trip to Jabri is worth it, dont you think? they serve good food and i do not think that they serve any alcohol..also, downtown amman has many places that are really Baladi but the food is really good, i do not know what kind of atmosphere you are looking for, but if they were out of towners maybe they will like it. sorry i could not help much.

just take them anywhere, so what if it's got alcohol? or (if ur the one buying all the time) are ya trying to avoid a going bankrupt ?

Hey Tamara ..
well .. there is La Bruskhitta in Abdoun , near Abdoun mall , the Salad house (I think they do not serve alcohol drinks , I once heard that its owned by Kazem abu Ghazaleh , and as far as I know the guy is religious and wont have alcohol served in his restaurants) ..
there is also this place called Bologano or Bologana , as far as I know it has two branches , one in the extension of Garden's st.I have took a /Fettuccine and it was good (serves Italian food by the way ) and I know that the other branch is in a hotel on the 2nd or 3rd circle in Jabal Amman ( I can check for you , will ask my colleagues , they know better) also serves Italian food with no alcohol , I think the whole hotel is alcohol free.

Maybe you should check this new Iranian restaurant in Abdoun , right in front of Gerard , I am not sure if they serve any alcohol.

I am running out of places .. but I'll rub my mind , and might come up with new places by morning time :) ..

pity that Centro is not alcohol free .. eah .. I share the same thought with you , lately , its the TREND to open a restaurant or even a cafe with alcohol drinks !

Anyway , I'll be glad to get you the phones of the places I mentioned .. and BTW .. I LOVE La mirabelle .. isn't it the most classy hang out in Amman , no teenagers , no argeeleh .. beautiful place , and yummy yummy food !

Well I do take them to such places as Kalha, but at some point I will have to take them to a classy place : ( and then I have the problem finding one.

Its a moral issue not a financial one ! all MEETINGS are covered by the company

Thanks for the help the phone numbers will help, its a shame that I have a problem with people wanting Arabic food.

and keep the comments as larg as you need them to be, no worries : )

Oh and Yes Danah La Mirabelle is the best place, add to that wild Jordan.

Hey Tamara .. sorry for dropping by late :) .. but its kinda of crazy at work lately .. anyways .. guess what .. you can also take them to WOX , to enjoy some chinese flavor with no alcohol , also Noodasia serves Thai food .. those two places are alcohol free as far as i know ..

here are the phone numbers :

You can always call and go check these places ..
And .. YESS .. wild jordan too .. I don't know about you .. but I loved Barnie's when they first opened .. lovely hang out .. it is starting to recover some of its customers now after !

That's a toughi, although i think i can plot a vague yet considerable pattern of places that are trying to establish themselves away from the unnecessary complimentary alcohol offering while betting on the good food they serve.

I can add Wooden in Shemisani (near Power Hut), obviously the food court at Mecca mall is a viable option depending if driving distance is no issue (which seems to be the case).

the twin back-to-back pizza places on Madinah road come to mind, although their seating are ridiculously uncomfortable but the food is A-grade and cheap.

and finally, nothing wrong with old school outlets such as Jabri, and if your guests are a bit venturous, perhaps K&K (i believe its in Rabyih) should be pretty much the highlight of their trip to Jordan (unless whatever business that brings them over here is more bizzare than eating Korash).

Thanks for the help, I was looking more for higher standard restaurants and definitely not fast food.

Hi tamara I liked yr blog about resturants here, really i find difficulty in going out, most of the places has argeeleh which i hate me and most of my friends or alchole. got bored of le mirabelle and the other places which don't serve alchole... broadway and jerard at abdoun circle r quite nice but not formal.

i liked how u described yrself in yr profile, u r pretty much like me, even yr job path is like mine : )