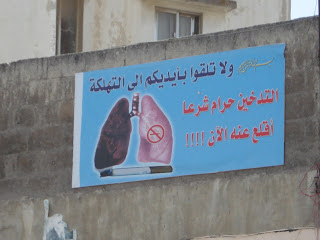 
I had a meeting yesterday in Jabal Al- Natheef yesterday, and I saw this ad if I may call it so. In theory an ad should sell an idea, now I'm not a marketing person but having common sense is enough to see that this will hardly sell any thing.

It totally disregards that smoking is an addiction ! a physiological one to be exact, and should be treated as so, I would think that they had this in mind thus used the religious approach. Which is used in the worse sense ever !

We could dissect on how many levels this is wrong and stupid but I will leave it at that.
Posted by Tamara at 2:33 AM

I apologize in advance, but I disagree with you.
There are certain segments in the society that would ONLY obey if someone proved to them that it's a religious mandate. In fact, among the smokers I've seen in Jordan, hardly any were of the very religious people. If anything, it proves that similar messages is reaching those crowds.

I know smoking is an addiction, I'm still suffering from it even though I've quit 3 months ago. The idea is that such message does provide some compelling ideas

But, what if you're not religious? or not even Muslim? :)

First of all you don't need to apologize for disagreeing with me.

" if someone proved to them that it's a religious mandate."

i agree that many people will obey only in this case but is this PROVING that ? its too abrupt to prove any thing.

Again you are proving my point that the ad is stupid and might even have the opposite effect, what would an un-religious young man think when they see this approach ?!

ok tamara, i expected a different response from you :)

advertising does not only go for selling products or even selling ideas, ad business is very wide and it does touch on very sensitive issues sometimes, like aids, car accidents, domestic voilance and the like, in Europe they have a huge market for those kind of ads, in Amman, we know non of this kind, but it is definitely the work of an advertising company hired by some organization... seeing that ad up there i have to think well, jabal el natheef are the audience, they probably are more religious than average (in the sense that you can reason with them on religious basis, not like athiests who have no moral grounds), the idea of it being 7aram has been talked about by some muftis so it is not totally random, the way it has been displayed, well, sucks! it does not drive attention nor call for action... i think if they dropped that "7aram shar3an" and left the verse, it would be 10 times more effective... thing is, even addiction can be healed with faith :)

let me just say that I agree with the "IDEA", I am against smoking, I love the fact they have an ad for it, but the ad SUCKS big time.

You agreed with me it's not done proparly... to me this is even worse than not having any !

the Ad is so un-attractive.

Welcome to my corner : ) and yes I could not agree with you more !